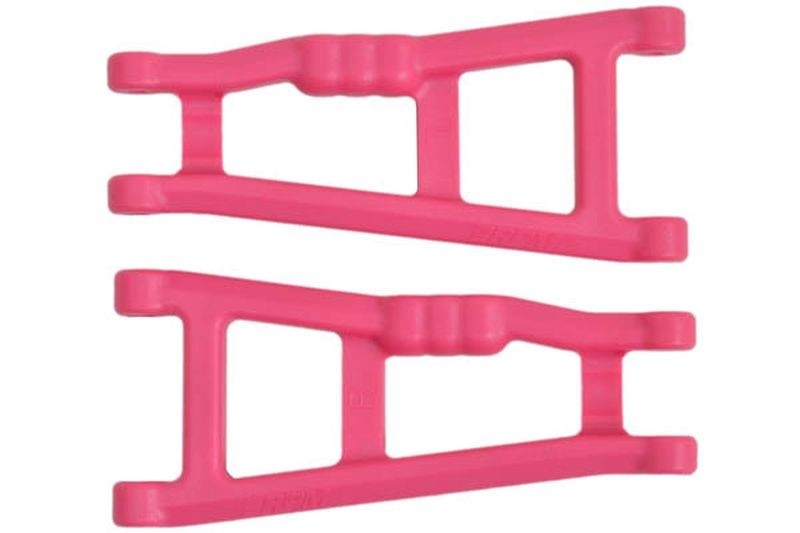 RPM rear A-arms for the electric versions of the Traxxas Rustler & Stampede are stronger and more durable than stock versions, yet we’ve also managed to eliminate over 7 grams of weight per arm! That’s 14 grams of unsprung weight eliminated with a single pair of rear RPM A-arms! Coupled with a set of RPM front A-arms, the total weight loss exceeds 24 grams, or almost a full ounce! We accomplished this without creating any weak points nor are our A-arms any more flexible than the stock versions. Additionally, we’ve adjusted the shock mount locations slightly to allow more noticeable tuning adjustments when using the inner or outer shock mount holes (while the center hole remains in its stock location). While we were at it, we eliminated over 0.030” or 1/32” of slop from the inner arm mount and more than 0.010” or slightly less than 1/64” of slop at the outer hinge pin for an ultra-smooth, slop-free suspension system.
RPM A-arms for the electric versions of the Traxxas Rustler & Stampede are molded in black, blue, green, red or pink and are sold in pairs – 1 left rear and 1 right rear per package.


As our hobby grows, we’re seeing more diversity in gender and what better way to celebrate that diversity than with the addition of pink to our color line. Not only is pink a great color for ladies, it’s also a great accessory color to match or contrast nearly any paint scheme, regardless of gender.
RPM pink products are molded from our trademark blend of superior nylons and are backed by our industry-leading limited lifetime breakage warranty. Not only are they great looking, like all RPM parts, they’re tough!
The following items are our first parts available in Pink: